I've created a webpage through caring bridge, because it allows for family members to easily update my condition online. It also sends out messages when my condition is updated. If you are interested, you can see my page at:
http://www.caringbridge.org/visit/carolynrichardson


This will be the webpage updated after surgery, so check there, not here!!!
Posted by Carolyn at 7:21 PM

Dr. John Oro is a leading chiari expert that runs the Chiari Care Clinic in Aurora, CO. He has created a blog that keeps patients up to date on research. I've linked a few of his articles here. I think he is a brilliant doctor working hard to help with chiari education, awareness, and research.

This is Dr. Oro's explanation of why chiari goes unrecognized or ignored. It's a great article:
Chiari Times

An amazing article about how cerebellar dysfunction may cause fits of rage:
Chiari Times Rage
Posted by Carolyn at 12:09 PM

Heavy head
after holding head up for 30 minutes

Wake up sweating and shivering

Bladder problems
drips before and after urination
urgency
incomplete emptying

Hip pain/pain down back of legs

Temperature control problems/goosebumps/overheating
Posted by Carolyn at 12:17 AM

Pictures, finally (I found time, cause I can't sleep!)

In my Aspen collar 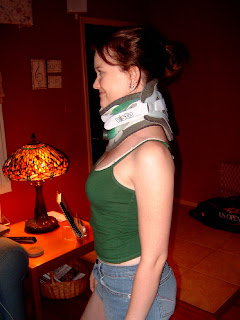 In my Cervical-Thoracic Orthosis...which I'm supposed to be wearing 6 hours a day!!! 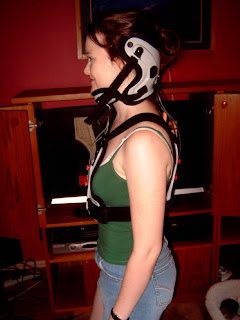 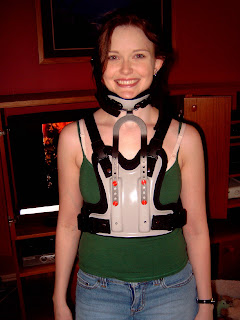 A couple days after my gallbladder surgery 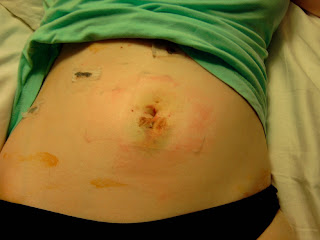 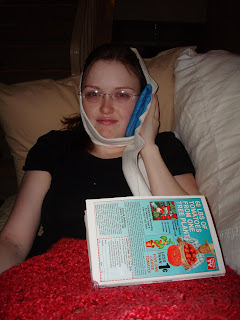 The last time I had invasive cervical traction...not looking forward to having it again 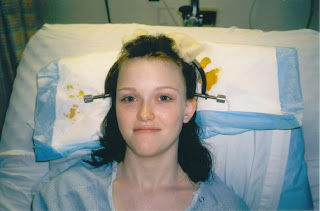 Still pretty normal...I guess.
And please don't say "But you look so good!" 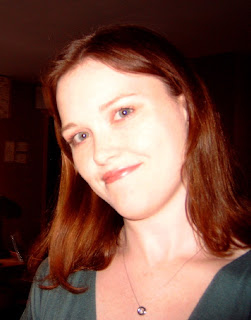 Most of my doctor's appointments are over-with by now.
Today, I saw the cardiologist. Cardiac clearance is required. Unfortunately, with my malformed aortic valve (bicuspid instead of tricuspid), thickening of this valve, my heart palpitations, and the tachycardia after my last surgery, the doctor cannot yet give me clearance. He did an EKG which showed the irregular heartbeat, but he is also requiring an ultrasound of the heart to be done. This will happen tomorrow.

Otherwise, things are looking good for surgery. I'm just having a bit of anxiety, which is making me a little moodier than normal (sorry to those that have to be around me).

I also wanted to mention that there is a new book out on chiari which should be quite comprehensive. It is called "Conquer Chiari". You can buy it at:
http://www.createspace.com/3338400
Posted by Carolyn at 5:07 PM

Last night, my friend and colleague, Lorena, held a voice recital at Prospect High School. She did an amazing thing for me by making this recital into a benefit to raise money for my medical bills, as well as spread awareness about Chiari and POTS. It was a wonderful and thoughtful gift.

I want to thank everyone who donated last night. The total came to $469.06. Your kindness and generosity are really appreciated, and this will certainly lighten the financial burden for my family and me.
Posted by Carolyn at 10:59 AM

For the first time, a national chiari event is being organized to raise money for chiari research and spread awareness. So far, 5 of the 50 states have confirmed walk sites for September 20, 2008. Several states have recently declared September to be Chiari Awareness Month. Illinois is not one of these states. There is no walk organized in Illinois yet. I'd love to help out, but I won't know what I can do until after my surgery and recovery. Nonetheless, this is a really exciting time for Chiarians! National recognition is coming. It just takes time.
http://www.conquerchiari.org/walk/CCWalkAcrossAmerica.htm
Posted by Carolyn at 10:56 AM

Here is a very brief overview of the conditions I have:

Chiari Malformation: A skull malformation. My skull was formed too small, causing pressure in the back of my head, and a blockage of fluids that should flow freely in and out of the brain.

Ehlers Danlos Syndrome (EDS): A connective tissue disorder. The main things affected in me are my ligaments and veins. My ligaments are looser than they should be, causing certain joints to easily dislocate. My veins and arteries are also lax, making it difficult for blood to be pumped the way it should.

POTS: An autonomic dysfunction. My autonomic nervous system malfunctions, causing problems with all involuntary functions of the body. This causes difficulty standing, due to my heart rate and blood pressure not reacting properly to the effects of gravity.

Tethered Cord Syndrome (TCS): A spinal cord malformation. My spinal cord is anchored in place, not allowing for it to move freely within the spinal column.

Headaches--I have a constant pressure headache. This pressure sometimes reaches a debilitating level. I also get migraines and more acute, sharp headaches.

Nausea--Nausea can be caused when there is increased pressure on a certain part of the brain. It is often worse when I am upright, and relieved when I lie down.

Back pain--I have pain throughout my spine. This is caused by the tethered spinal cord and the loose ligaments holding my spine together.

Fatigue--I require a great deal of sleep. If I don't get enough sleep, my symptoms will worsen, leading me to return to bed and get more sleep. Basically, I am a slave to my body. If it wants more sleep, it will get it.

Digestive problems--Due to my autonomic dysfunction, I don't always digest food properly. I've changed my diet a great deal, but often, I still get terrible abdominal pain after eating.

I take medication to constrict my veins, in an attempt to help my blood flow improve. I also take salt pills regularly to force my body to retain more fluid, which can help keep my blood pressure up. Salt pills are also the only thing that helps when my level of consciousness lowers. I try to avoid pain medications, because I've been in pain for so many years, and I don't want to destroy my digestive tract. I treat pain with ice packs, heating pads, and lots of rest.

I've already had two major operations, but obviously, I'm not better yet.

In July 2002, at the age of 18, I had a posterior fossa decompression surgery. This involved removing part of the base of my skull and the back of my C-2 vertebra. I felt much better at first, but started to get worse again after a couple months.

In December 2003, the day after my 20th birthday, I had a cranio-cervical fusion. Titanium rods were bolted to my skull and screwed into my top 4 vertebrae. This was intended to fuse my skull in place atop my spine.

After that last surgery, I worked very hard to recover. When symptoms didn't improve, the doctors said that nothing else could be done. Then, I began to search online for more answers. This led me to have another set of MRI's. I sent these to my doctors at The Chiari Institute in New York. It was confirmed that I have an occult tethered spinal cord. It is also likely that I have a failed fusion.

I will be having a section of the filum terminale operation to de-tether my spinal cord. This should release the spinal cord and allow it to move freely.

Quite possibly, I will also require a revision to my current cranio-cervical fusion. This would reset the position of my head, allowing for greater stability.
Posted by Carolyn at 10:46 AM

My Surgical and Diagnostic History (links to my website/archives)

Anatomy of a chiari malformation 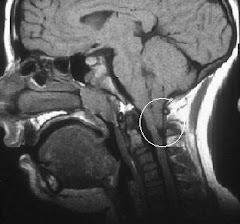